These are the horses and donkeys that you are helping with your generous donations.
Included here are the Horse Stories, a short story of how each of our
animal friends came to live at the sanctuary. 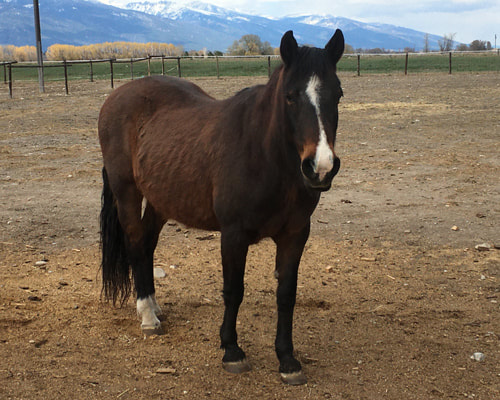 Nikki is a 27-year-old MorganXArab, and belonged to a good friend of Debora’s who had passed away unexpectedly in 2014, leaving four horses behind. Her husband didn’t know what to do with the horses and was thinking of taking them to the horse sale. Debora knew none of them were trained enough to sell as riding horses and would end up on the meat truck. Debora took the horses and asked the board members to vote on adding “rescue” to the program, and the rescue function of Wings was born.
Homes were found for two of the horses, and Debora took the other two. One passed away from an embolism shortly thereafter, so Debora ended up with just Nikki. Nikki was trained but had a reputation as being a handful, although Debora never found that to be the case. Nikki and Debora went on many trail rides with no issues.   Nikki turned out to be insulin resistant and foundered as a result. She also developed Cushing’s Disease and has chronic lameness issues. Debora hopes to get her healed to point where she is rideable again. 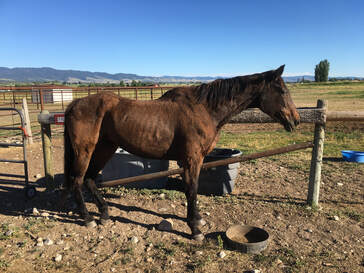 This senior Thoroughbred mare arrived on May 28, 2022. Her owner had died recently and all family members live out of state so there was no one to take care of her. She is supposed to be in mid 20s, with little or no back teeth.
Her body condition when she arrived was a 2 1/2 to 3, a generous estimate. We are glad the family did not take the easy way out and euthanize her, instead they reached out to us.
Star needed a vet dental check, deworming and a LOT of senior feed with various senior supplements to get her back in good weight. She is slowly improving on pasture, and we are working to socialize her a bit more. With a senior horse like this, donations of Senor Feed, Beet Pulp and Ground Flax, all available at your local feed store are much appreciated. 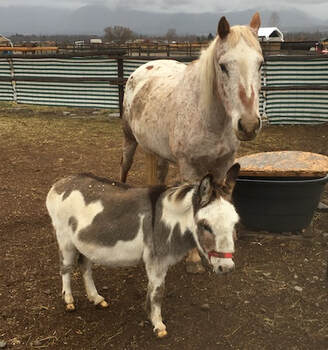 This 30-year-old Appaloosa (Cisco) and 18-year-old mini-donkey (Poco) were rescued November 23, 2021 from a field near Wings. The owner, who lived across town, was found dead in his home and no one knew where his animals were. They were found in a pasture with very little grass and no water and Debora brought them to Wings immediately.
A generous Wings volunteer sponsored their immediate care, and their health and training needs are being evaluated. They are very attached to each other and are sweet and sociable. 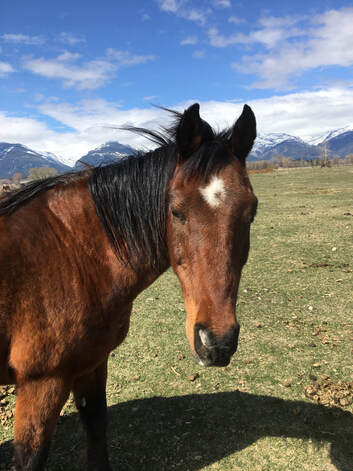 Lola is a beautiful Arabian/Quarter horse mare about 17 years old.  She belonged to a LayzD client and Debora was called to trim her hooves.  The owner took good care of Lola but she had a club foot on the front that was getting worse and worse. The owner had numerous farriers come and try to trim it, but it developed a crack in the front that ran all the way up to the hairline.  The vet took x-rays and she had an infection on the coffin bone.  Lola was high strung and became hard to handle.
Debora took Lola before Wings was established and with diet changes and her hoof care Lola's hoof became better, the infection went away and the crack grew out.
You could say Lola is one of the first Wings horses.  Today Lola still has a club hoof but she is sound and healthy.  The hoof give her no problems, she is well behaved and easy to work with.  The previous owner stays in touch and is a generous supporter of Wings. 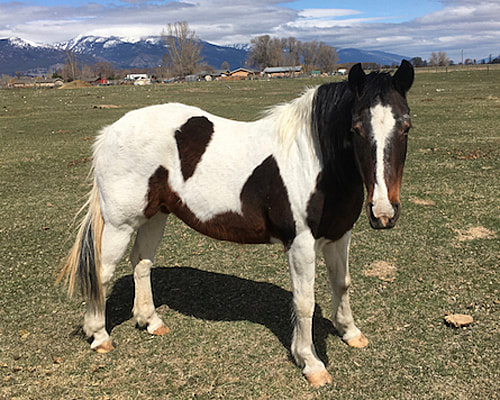 Patches is an American Paint in her 20’s. A senior couple from Idaho were selling their ranch and moving to the Bitterroot. Patches was their last horse and as they were getting older they decided it was best not to continue with horse ownership. They invited us down and donated all their hay (5-10 ton), 15 pen panels and 2 gates and all their horse equipment, which was very generous.
Patches is a very friendly horse and can handle light riding and could possibly be a riding therapy horse if we move into a riding therapy program. 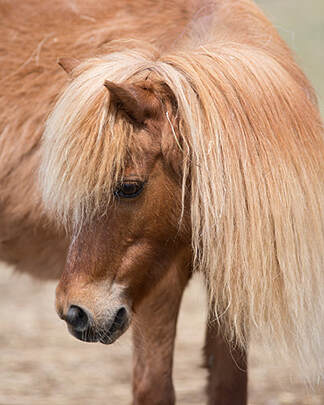 Dancer is a 25-year-old mini-horse who was born and bred in the Bitterroot valley. A retired couple bought Dancer, her daughter Lucy and another mini sometime around 2008, and eventually became unable to care for them. They were adopted out to a family in Missoula who took very good care of them. Eventually that owner retired and ended up traveling a lot, and felt bad that the animals were not getting enough attention. She called Debora and asked her to find a home for them, so Debora brought them to Wings. Dancer is insulin resistant and can’t be on pasture, and has other special needs. She will remain at Wings with her daughter Lucy for the rest of her life. 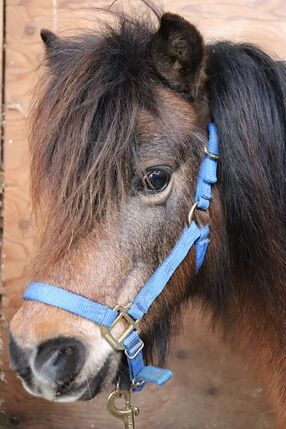 Lucy is a 15-year-old mini-horse who was born and bred in the Bitterroot valley. A retired couple bought Lucy, her mother Dancer and another mini sometime around 2008, and eventually became unable to care for them. They were adopted out a family in Missoula who took very good care of them. Eventually that owner retired and ended up traveling a lot, and felt bad that the animals were not getting enough attention. She called Debora and asked her to find a home for them, so Debora brought them to Wings. Lucy has Cushing’s Disease and is insulin resistant so she can’t be on pasture. She will remain at Wings with her mother Dancer until Dancer passes. After that, adoption may be a possibility if someone can be found to manage her special needs. Lucy needs a sponsor for her Cushings medication. 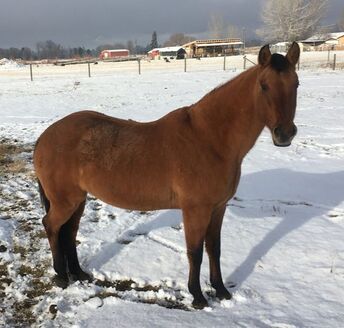 Honey is a 12-15 year old quarter horse dun mare who showed up on Craigslist, advertised at a $500 sale price. She had been bought out of the Missoula horse sale by an older gentleman who didn’t know much about horses. He wanted a horse for his grandkids to ride, but they didn’t come to visit very often, and when they did they weren’t interested in the horse. So he put her on Craigslist but didn’t like the people who were interested in her as he thought they were meat buyers and he didn’t want to sell to them.
A friend of Debora’s went to check Honey out and found she was lame due to a shoulder injury and her back end was tight and painful. She’s very sweet and not very old, so she asked if Debora would rehabilitate her. The owner relinquished Honey and transported her to Wings at no charge.
Honey is well trained and well behaved and can be ridden lightly, possibly as a therapy horse. We discovered that she was an outfitter horse and probably had some accidents. She will also be up for adoption to the right home. 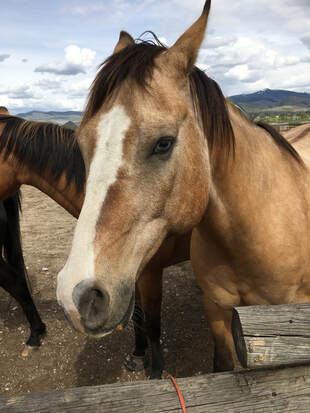 Ice is a local valley horse, owned by one person since he was a baby. Ice developed lameness issues many years ago and Debora rehabbed his hooves until he could be ridden again. The owners farrier was not able to keep up with the hoof rehab that Debora did, so his feet started to get worse again, which is very common.
The owner couldn’t afford to keep all her horses, so she sold one and approached Debora about taking Ice since she was able to rehab him in the past. He still has some soreness in his feet but it’s possible he can be used for light riding for our veterans program in the future. Ice will stay at Wings for the foreseeable future due to his recurring lameness issues. 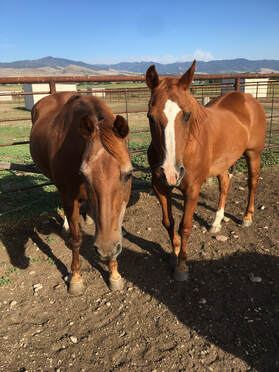 Hallie and Dub were brought in July 2022 with their companion Copper, who passed away at the age of 33 shortly after arriving. These horses belonged to a gentleman who was going into assisted living and was looking for a home for the horses to avoid having to euthanize them. Their vet recommended that he contact Wings, and he decided to relinquish them to us with a small amount of money to help with their care.
Hallie and Dub are 27 and 31, respectively and are well-bred (out of the Doc BAR line, a famous quarterhorse stud) but come with senior conditions - hooves overgrown, arthritis and they probably need dental work. Their body condition is pretty good. We can keep it that way with good grass hay and senior feed.
They are doing well on pasture and have made friends with the rest of the pasture herd. Your donations will keep them fed through the winter so they can live out their lives peacefully. They can be adopted out if they can go together. They need someone who knows about horse health since they are seniors, and they need shelter and heated water in the winter.
The Donkeys
Wild donkeys are rounded up on government lands by the Bureau of Land Management (BLM) as a method of controlling the wild population, not because they are sick, injured or starving. They are auctioned around the country, usually with wild mustangs who have also been rounded up for sale. Many times these donkeys are rescued from or relinquished by people who are not prepared to tame and train a wild donkey. 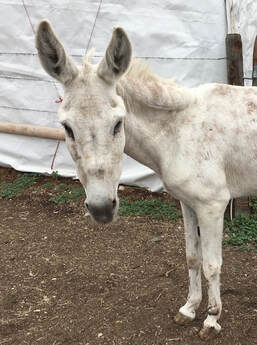 Louise was rescued a few years ago, along with another donkey named Thelma, by a valley woman who drove a UPS truck up on the reservation and saw them in a field. They were in really bad condition so she called reservation police, who came out and confiscated them. A mare who was with the donkeys was too sick to be moved and was euthanized. The woman got the donkeys to her home in Corvallis and then asked Debora to take them. They could hardly get Louise to walk, but they got them both to the sanctuary. Debora fixed their feet, and within a year Thelma was adopted out. Louise had a much harder time, as she had bedsores and laid down all the time. Her blood work showed that she had Cushing’s Disease, so it was a long, slow rehab process. Her feet had a lot of abscesses, which took a long time to heal, especially because she didn't like having her feet worked on. Louise is in much better shape now but can’t be on pasture and is on prescription medication. She won't be adopted out unless someone is qualified to take care of her, but she is looking for a sponsor. 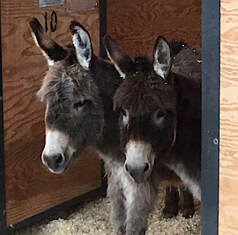 Zoe, on the left in this picture, is a 34-year-old mini-donkey who was rescued by the same owner that asked Debora to take Lucy and Dancer. She was together with her companion Ariel for all of Ariel’s life, so they weren’t separated when they were brought to Wings. They both had developed adipose fat pads from too much rich grass and couldn’t be on pasture.  Unfortunately, Ariel passed away in August of 2022. Zoe will remain at Wings for the rest of her life due to her special health needs. The staff give her extra attention as she is missing her companion, and she is a sweet and loving donkey. Senior donkeys and horses can have a hard time transitioning to a new home, so we are glad to keep Zoe and give her a happy, loving life.