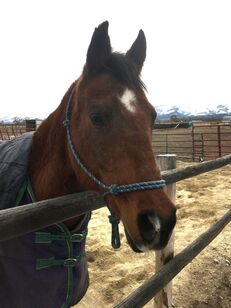 Ode to Spike
by Debora Lay
I met Spike and his sister Kate about 11-12 years ago. A handicapped woman, Suzanne, contacted me about hoof care. Both her horses’ hooves were in terrible shape. I went out and proceeded to rehab both Spike and Kate’s hooves. Spike was determined to be Insulin Resistant by symptoms and a new diet plan was also established. Suzanne’s grown children and her grandchildren lived in Europe. They were planning to come visit for the summer and Suzanne wanted both horses safe for the kids to ride.
Spike had been put under saddle many years ago when he was young but not ridden much since. He had terrible ground manners and needed to be restarted. Suzanne hired me to train Spike and tune up Kate. And so our story began. I rode Spike around the St. Mary’s neighborhood, took him on trail rides in the Bitterroot with many different groups on a regular basis. When summer came he was ready for the kids, and they had a great time. The family decided to come back each summer and so it was my job to keep Spike ready to be ridden by novice kids. We trailed in the fall and spring each year, taking the winter off. This went on for many years.
Suzanne’s health began to get worse and before she died, she made arrangements for Spike to go to Bitterroot Therapeutic Riding (no longer in business) as he was an excellent safe riding horse. There he was allowed on pasture which aggravated his metabolic condition and caused him hoof pain. When BTR closed its doors, Spike was sold to a novice horse family who was unaware of his condition. They put him on full time pasture with other friend’s horses and his health suffered. He developed severe laminitis and foundered. The farrier they used did not know how to manage his hooves or deal with the issue. After 2 summers of lameness, they contacted someone I knew looking to re-home Spike.
Bea called me describing Spike whose name had been changed to Sitka. They thought he was an Arabian gelding, but actually he was Arabian/Quarter Horse cross. As Bea described Sitka I knew exactly who he was, it was my Spike. She asked if I want to go check him out and I said it was not necessary, I knew the horse well and to just send him to me at Wings.
When Spike got off the trailer I wanted to cry. He was in terrible shape, thin, lame and looked much older than his 20 years. I was suddenly reminded of the end of the Black Beauty story when Beauty’s previous trainer found him and brought him home. My Beauty was home and I was determined to get him back to health and light riding shape as he enjoyed the mountains, trees and trails so much.
Spike has been here about 2 years. We have worked on his hooves that were severely damaged from years of both neglect and adverse metabolic conditions. He had good days and sore days. I had high hopes for my boy that will never be realized. We found Spike this morning. He passed in his sleep in late March, 2022.
Run wild Spike on your now perfect feet in your now perfect body. I am happy my Beauty came home and had a few good years here with both horse and human friends that loved him.

Amigo was a 30-year-old registered Tennessee Walking Horse who belonged to a man named Buzz, who’s neighbor was a friend of Debora’s. Buzz was in his 80’s and needed a bit of help with Amigo’s hooves and with his training. Buzz had previously fallen off Amigo and hurt his back, so Debora took over the training. Since Amigo was alone and chewing on the fences from boredom, Debora would take other horses there for companionship. After a few years Buzz started to think about what would happen to Amigo after he was gone, so Debora helped him think of possibilities. Before anything was decided, Buzz became ill enough to be taken to the hospital. Debora brought Amigo to the Wings facility to care for him while Buzz was recuperating.
Buzz was moved to assisted care and Debora had arranged to bring Amigo to see him, but before that could happen Buzz went back into the hospital, and then into hospice care. At that point, Debora was really determined that Buzz and Amigo would get to see each other. There was a possibility of taking Amigo to family in California but Debora was concerned about transporting Amigo for that distance since he had been in a trailer accident and didn’t do well in trailers. She has since resolved that issue and Amigo loads and trailers well. Debora was also worried that the family would not be able to handle his size and temperament and would sell him to someone else. If that happened Amigo could end up going to slaughter, as big, meaty horses often do. 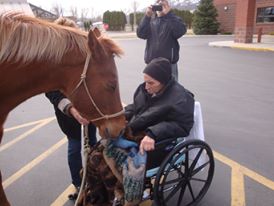 Buzz’s family decided to let Debora take Amigo.  This was prior to the founding of Wings.  Debora was finally able to arrange to take Amigo to the hospice to see Buzz. On an Easter Saturday, she loaded Amigo and his friend Wrangler in the trailer and took them to see Buzz. Both horses were on their best behavior, loading and unloading calmly, even though it was snowing and a bit icy. Buzz’s caretaker brought him out in a wheelchair all bundled up. Neighbors, friends and family were all around as Amigo walked up to Buzz and put his head in Buzz’s lap. (Add picture) Debora took Buzz’s hand and put it on Amigo’s face. They visited for a while and said goodbye, and everyone took pictures and everyone was crying. Amigo was a perfect gentleman! Sadly, Buzz passed away the next night. A short time later Debora received a check from Buzz’s daughter. Buzz had left a modest amount of money to help with Amigo’s care. Amigo was at Wings since 2011 and passed away on December 6, 2021. 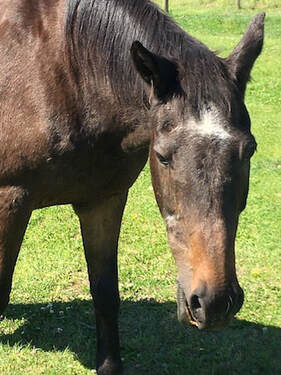 Hoback was a 35-year-old Quarterhorse who came from a gentleman who was moving with his wife to Indiana, where she is being placed into a care facility. They will be near the rest of their family but wouldn’t be able to take a horse with them. His ranch was being auctioned and he needed to find a home for his horse before they moved. When he couldn’t find anyone to help him, he contacted Debora, who agreed to take Hoback. The man had been an outfitter for many years and had ridden Hoback for a documented 30,000 miles! He had Hoback for most of the horse’s life and they had developed quite a bond, so he was really wanting to see Hoback go to a good home. He offered to help with Hoback’s expenses when he can, so Debora knew he cared very deeply for the horse, which is always good to see. Hoback was at the Wings facility from May of 2021 to August, 2021, when an intestinal ulcer that had been previously undiagnosed flared up. Hoback was in a lot of pain and couldn't be medicated because the pain meds would have caused accelerated internal bleeding. There came a point where the existing internal bleeding was too much and Hoback could not remain on his feet. The decision was made to put him down. He was a sweet, gentleman horse, and we miss him. 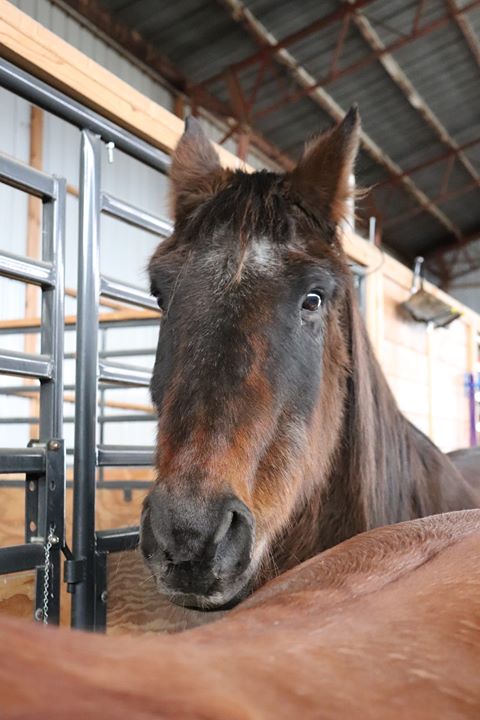 Wrangler was a 35-year-old off track Thoroughbred racehorse that Debora received in 2005 in lieu of payment for training a horse. Although skeptical, Debora thought she could train him and sell him. She soon found out he couldn't be tied because Wrangler had been in an accident and was very skittish about being tied. No one had worked with the issue, they just never tied him.
When Wrangler came off the track he lived in Texas and had been trained for rodeo work. Debora found he was head shy and too tall for her to put a bridle on without a big mounting block. She was able to ride him but he was pretty stoic and not a cuddly horse at all. When Debora started to work with the Reno Rodeo Association as a wrangler and was invited to try out for the flag team, which is an elite group, her personal horse, Sundance was not comfortable with the flag, so Debora began to use Wrangler. It turned out that he knew exactly what to do when Debora picked up the flag to practice with him.
The only drawback was that Wrangler was really fast! He would blast down the arena and make the turns at speed, laying over like a motorcycle racer. Although their tryout for the flag team wasn’t successful, they were invited to practice rides with the drill team, which is the elite of the flag team. Wrangler was fast enough to be in the outside position when they lined up to do the circle - his trot speed matched everyone else’s lope! Because of this everyone started to get to know Wrangler and he had a bit of a fan club.
Wrangler was also very good working with cows and Debora got invited to a lot of events because of it.  He knew just what to do. A friend of Debora’s who owned a roping arena invited Debora over to find out what kind of training he’d had. They discovered that he had been trained as a Junior Rodeo horse. He was good at all the rodeo events and knew what to do for every event. He knew the barrel pattern, roping as both a header and heeler and other skills.  After that, Wrangler and Debora spent many Wednesday nights working the roping arena.
After Debora started the Wings Programs Inc., she asked the board members to take Wrangler in as she was contemplating a job out of the area, and she wanted to make sure he would always have a home. The board agreed, and although Debora did not leave, Wrangler became a sanctuary horse who was supported by Debora.